Apparently today marks National Theatre Day and seeing that pop up on my newsfeed this morning just made me smile! I mentioned in my previous post that some stuff has being going on recently that has made me feel pretty defeated and down – a lot of the situation revolves around my theatre society and some problems we’ve been having. However, reflecting on all the wonderful experiences and memories that theatre has given me throughout my life has helped motivate me continue and rise above the negativity that is surrounding me at the moment.

As a result, I thought I would document my experiences in musical theatre and some of the memories I have made to look back on when I am down and to share with you! Throughout this blog I’ve tried to be mindful about photos of people so have only used ones with others in that are the public, professional photos that are online along with ones of me that I took during the shows.

My journey with theatre began when I was 3 years old and my nana took me to see our local pantomime company before their show. I was dressed up as Snow White and apparently cried all the way home because I wasn’t old enough to go up on stage for the audience interaction bit! I did join Abergavenny Pantomime when I was about 12 years old and performed a number of pantos with them but if I talk about them all I’ll be here all day.

At age 8 I finally got my first chance to perform when an opening came up in our local Amateur Dramatics Society – AAODS juniors. The show they were doing was ‘My Fair Lady’ and they were mid way through the rehearsal process when I joined. I had never heard of the show or the songs but I absolutely loved it and even got given a little cameo of ‘the flower girl.’ I stayed in this society until I was 18 years old and too old to continue as a junior – yep that’s 10 years of my life spent with this group!

The next show we performed was particularly special to me as it sparked the show as my favourite musical and my love for it has never died. If you haven’t already guessed, it was Les Miserables! I was nine years old and playing an ensemble member along with little Eponine! It has since been my dream to reprise the role as the older version of the character but that is yet to happen.

From here we performed all number of shows as follows;

In 2012, I auditioned and joined the AAODS seniors section for their production of The Sound of Music. This musical has always been close to my heart as it is one of my grandad’s favourites. This was honestly one of my favourite experiences ever and without getting all soppy, is probably the reason Alex and I became an item. I was cast as the Liesl to his Rolph and the rest is history!

When I was old enough to join seniors officially I did and did a further two shows with them – Singing in the Rain and Sister Act as an ensemble member which was amazing!

Despite doing a lot of theatre growing up, for a long time I was really shy. It took me 3 years to pluck up the courage to participate in my secondary school’s musicals but I am so glad that I did. As you can probably see, I never really got given many main parts in AAODS which was fine as I enjoyed performing no matter what. However, the school shows really gave me an opportunity to step outside of my comfort zone as an adolescent and take on some more mature roles.

I did four shows with my schools which were; 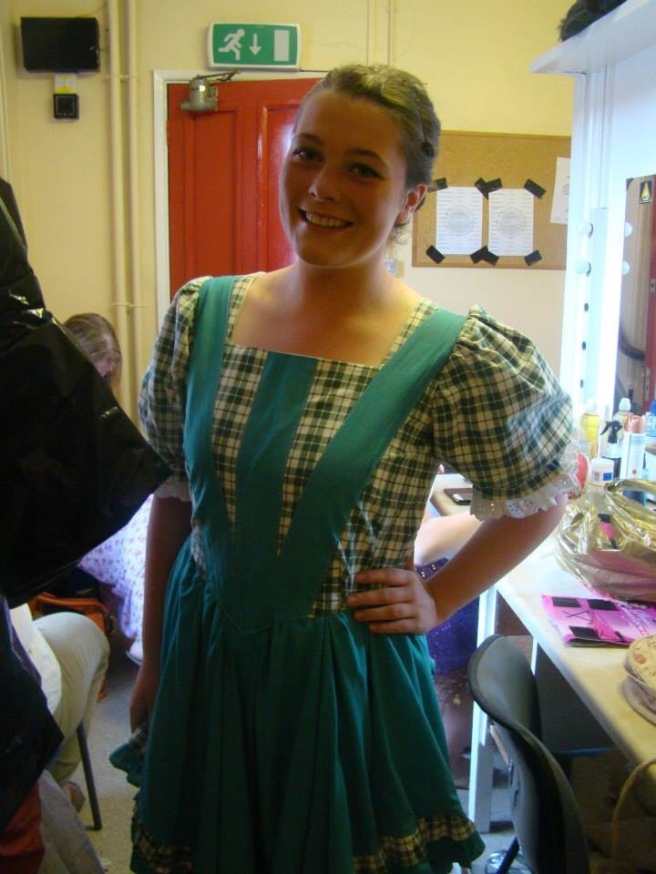 As you’ll probably know if you follow my blog, since moving to uni I have joined (and now run) the university musical theatre society, Loco Show Co. I performed in my first year in Into the Forest pantomime and the musical Disco Inferno, before getting elected as musical director for my second year. We did a panto called Winter Wonderland and Grease!

This year I had the pleasure of performing in a ‘Shrek the Pantomime’ that Alex wrote which you can read about here and we are now in the middle of putting on The Wedding Singer as my final show. In a weird turn of events and due to unfortunate cast changes due to a variety of reasons, I am now playing Julia in this production which is something I never thought would happen.

I’m aware this blog is extremely long so I won’t talk for much longer. I guess what I am trying to say is that although I don’t study drama or music at university, it is a huge part of my life that I am really grateful for.

That’s just me, I’d love to hear –  what are your hobbies and passions?

3 thoughts on “MUSICALS AND ME”

Happy 8 years to us 🥂💗✨
One month of Roo. Our timid, adorable and quirky little girl who is slowly coming out of her shell 🐱🧡
See you in 6 weeks angels 🥳🥰 #devonholiday
Sunday strolls ⛰☀️🍃
289 days until we’re home again 🏰🚢🐭✨ #waltdisneyworld #disneycruiseline #rebooked #florida2022 #disney50
Officially a cat mum! Welcome to our family little Roo 🐱🧡✨ #survivorcat #kitten #catsprotection