Hello and happy February everyone! January was a pretty full on month for me where lots of great things happened – I turned 22, saw the Jonas Brothers, got a promotion amongst other things. I think I’ll do a January recap soon that covers everything in detail. However, the highlight of the month has to be my Christmas present from Alex which was a trip to London to see Hamilton!

We had two days in London and headed up on the coach Friday afternoon. After taking the coach due to rail disruption on my last visit to London, we decided to look into this again and I can honestly say I will never take the train again when travelling from Abergavenny. The coach journey was 3 hours each way (no much longer than the train) and only cost £22 each for a return ticket from Newport to London, Victoria Coach Station. This was perfect for us as the theatre and our hotel were both in Victoria and the coach meant we were guaranteed in seat set with phone charging ports and plenty of space.

When we arrived, we headed to our hotel which was only a ten minute walk from the station. Alex had been proactive and booked the hotel off his own back as part of my present and opted for EasyHotel London Victoria. We have stayed at plenty of EasyHotels over the years in Birmingham and Milton Keynes and they have always been fine. However, this time was not the case. Alex had opted for a windowless room to save some money and honest to God it was the most awful thing we had ever seen. The room was TINY. Now I don’t mean that in a snobby way but there was literally not even enough space for Alex and I to stand up at the same time.

The room consisted of a small wet room and a bed. The one length of the room was the same as Alex as his head pressed against the wall and his feet on the wall at the other end and the other way must have been his length plus half of his legs. It was also absolutely boiling in there and the air felt so thick. I am honestly so proud of myself for staying in there as I was close to a panic attack and I don’t panic very easily. I’m sure we will look back and laugh about it but at the time it was difficult.

Having said that, the show made it a million times worth it! This was my first evening west end performance as I usually get to see matinees due to getting back home the same day. This made the whole experience even more exciting! I have wanted to see Hamilton for years, ever since I first heard the soundtrack I was in awe. My favourite type of musical are those that use music throughout to tell the story rather than lib (Eg – Les Mis, Cats, Into the Woods etc) and Hamilton does just that! I adore Lin-Miranda Manuel and the whole production, especially the lyrics and music are absolutely genius! I adore the way every character has their own motif and how the different melodies and lyrics appear in different songs.

When we arrived at the theatre, the first thing I noticed was how regal it was. It was definitely apparent that a lot of work had been put into the refurbishment and it just felt so luxurious! We headed straight to the merchandise to grab a programme and I almost jumped for joy when I saw that they sold the vocal and piano score for the show. Anyone that knows me will be able to tell you that I always look for the score when I go to show but they never sell them (apart from my Les Mis one I got in 2007). I braced myself for how expensive it would be but it was only £20! Alex treated me to it and a programme which was so kind when he already splashed the cash on the trip.

We then headed to our seats and I have to say that Alex outdid himself! We were sat in row Q of the stalls and we had a superb view! As soon as we sat down I started to get emotional as I never thought I would get to see this show let alone be sat where we were at an evening performance. I just felt so lucky and grateful. If you’re reading this thank you so much Alex, it was honestly the best present I could have asked for.

The show began and I can honestly say from start to finish we were both on the edge of our seats. Alex isn’t a huge fan of watching musicals but his words at the interval were “this is the best thing I have seen in my life” and I couldn’t agree more! There was so much going on onstage and everything was phenomenal from the performances to the choreography to the set and staging. I honestly cannot put into words how incredible it was. The contemporary choreography against the historical costumes and set perfectly complimented by the rap and various styles of music just created a masterpiece.

The way that they portrayed the going back in time from ‘Helpless’ to ‘Satisfied’ was genius with the same choreography used but from another characters perspective – I can’t describe it well enough to articulate just how clever it was. Every single performance was phenomenal and I cried tears of sadness, joy and just from being overwhelmed by the actors and their performances. If I had to pick, the stand out performance for me was from Simon-Anthony Rhoden as Aaron Burr – his rendition for ‘Wait for It’ blew us away but honestly every single member of the cast was outstanding! We were shook to also have the Broadway Genie from Aladdin, Trevon Dion Nicholas, as George Washington.

There were also some lines that really stood out and stayed with me from seeing the show live including “immigrants we get the job done” and “ladies it’s 1800, tell your husband to vote for Burr.” The underlying messages of this show were so powerful and relevant against what is going on in the world right now. I was so moved and in awe of everything about this show – the storytelling was effortless. The way to set was designed and was used was so detailed yet simplistic, there as constantly something going on wherever you looked – I feel like I need to see it again to purely watch the ensemble and what they are doing in the background. The revolving stage in the centre just added to the effect of the staging and choreography, with the hurricane tableau being stunning and the physicalisation of the bullet leaving the gun giving me goosebumps. There are too many amazing moments to outline in this post as every second was honestly a spectacle. 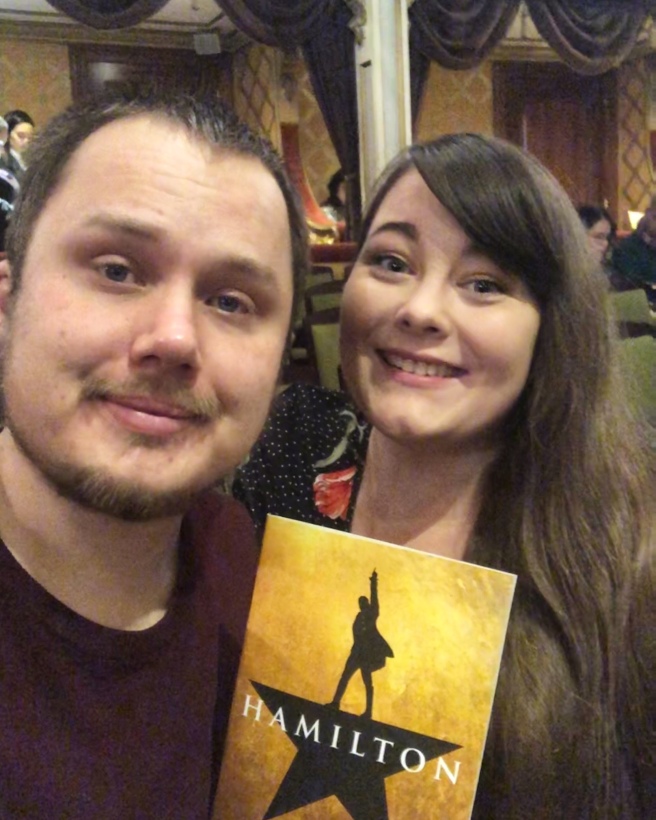 I have never leaped to my feet quicker than at the end of this show to give a standing ovation and the fact that the cast gave an ensemble bow rather than individuals says it all about the nature of this production and the messages behind it. Having now seen the show, I would go as far as to say that it is actually underrated. I know that you’re all probably thinking how is that possible but it’s true. I have never seen anything like it in my life and can say whole heartedly that it is the best musical theatre production to exist (and this is coming from an up to now, die hard Les Mis fan and lover of all theatre).

If you love musical theatre and haven’t seen this show, then I urge you to try and see it. I know that tickets are expensive, but Alex and I both agreed that we would pay double what we did to see it again – it really is that good. We also stand firm on saying it is the best thing we have ever seen in our lives including other west end productions and concerts.