Now that the post show blues have finally began to settle I can get around to writing this blog all about a wonderful week in pantoland for my first show back with Abergavenny Pantomime Company as Princess Jasmine.

If you read my last panto update blog, you’ll know that the entire company had been working tirelessly to put together our production of ‘Aladdin.’ We rehearsed pretty much every night the week before the show and officially had our opening night on Monday 17th February. Across the week we did 8 shows, including a matinee performance on both Friday and Saturday, so it’s fair to say it was a crazy, full on week! A full disclaimer that all the professional photos in this blog were taken by the talented White Dove Photography. 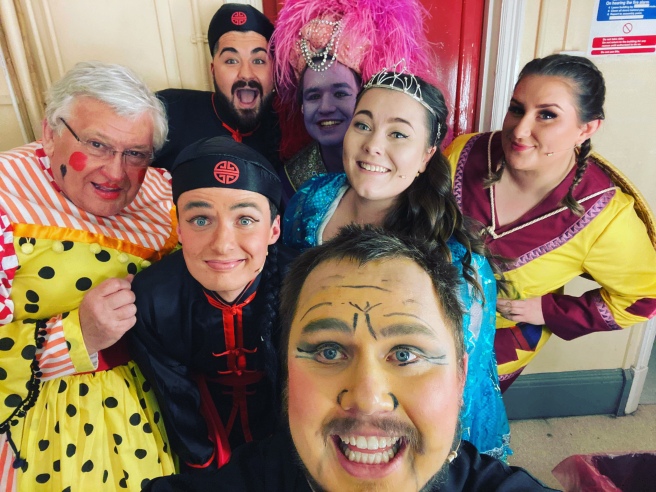 I have to say that this was probably one of my favourite shows for the atmosphere and by far my favourite panto I have been in with APC. It was such a great group of people and it was lovely to get to know everyone and enjoy the social aspect of am dram again. We would go to the pub more or less every night after a rehearsal and during show week – I think this is one of the reasons I’m missing it so much as I’d forgotten what it’s like to have a social life.

I think this panto will always be so special to me because it was the year I finally got the change to pay principle girl! I have been auditioning for principle girl since I was 15 years old and had always dreamed of the day I would be successful. Getting to play Princess Jasmine was honestly a dream come true and it was a pleasure to play opposite Chelsea as Aladdin. I got so nervous every night but I just wanted to prove to myself and everyone else that I deserved this part and I was good enough to be a strong contender in the Abergavenny AmDram scene. ‘Good as Hell’ really pushed me out of my comfort zone and ‘If I Were a Boy’ gave me a chance to sing at both the upper and lower limits of my chest voice. I’m really proud of myself and, even if it never happens again, at least I got to play the Princess once. 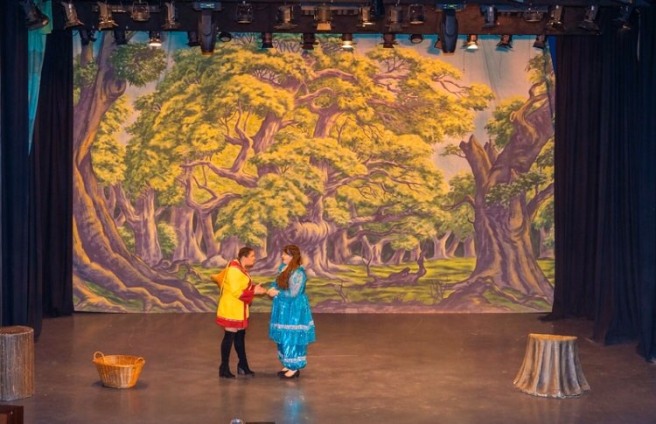 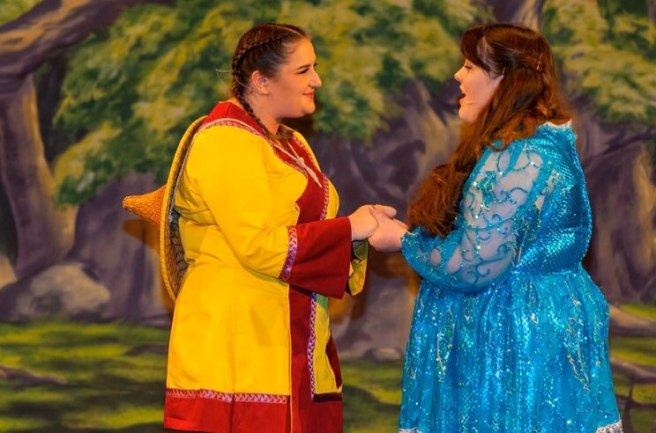 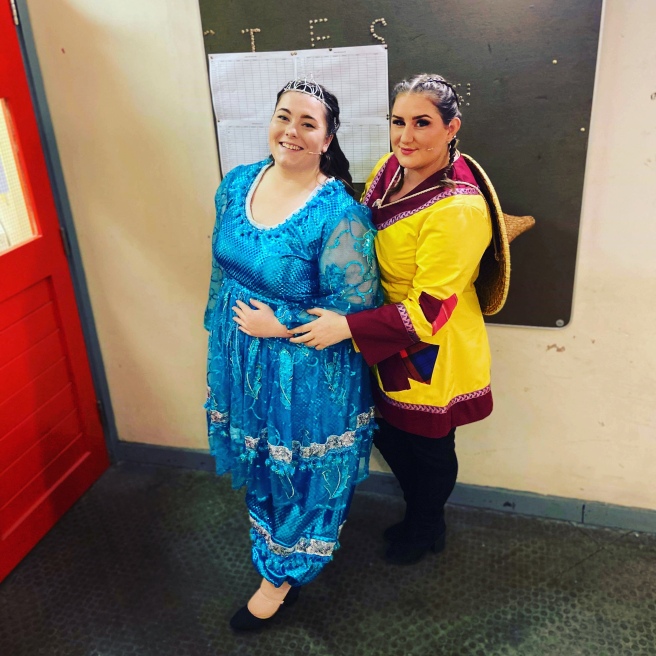 Can we also talk about the costumes?! They were absolutely stunning and I genuinely didn’t want to give mine back as I was living my best, girly, princess life! I was a bit nervy about getting costumes as I am deffo not built for the Disney Princess Jasmine belly dancer get up, but I couldn’t have been more happy with what I got. Everyone looked fantastic and the set, lighting and everything else was also superb. 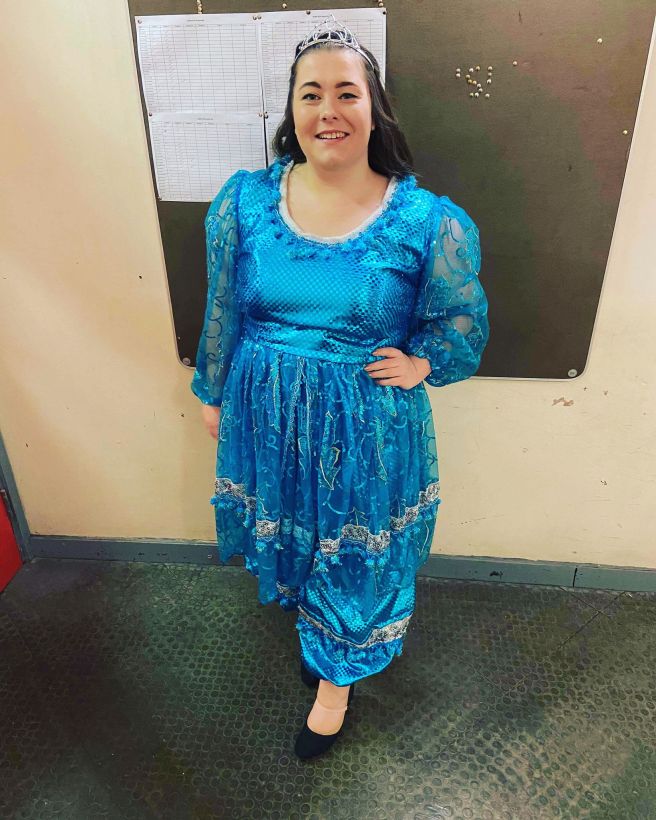 As I’ve talked about before, Alex reprised the role of the evil villain Abanazar this year and I honestly couldn’t be more proud. Everyone that I spoke to who saw the show said that he stole the show, and I couldn’t agree more. He had the kids in the palm of his hand – at times they booed for so long and so loudly that no one on stage could speak until it had subsided. That guy is forever my inspiration when it comes to all things theatrical – a truly talented man. 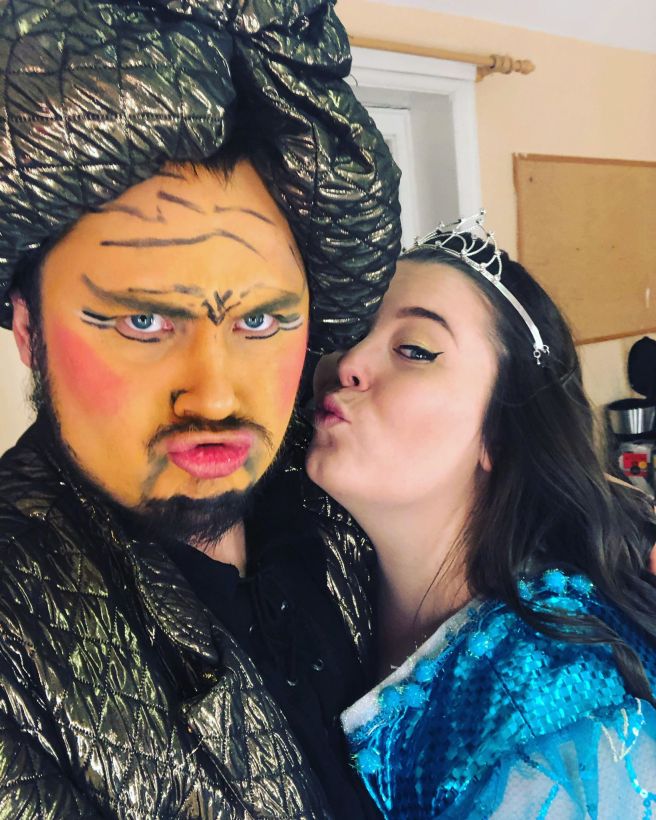 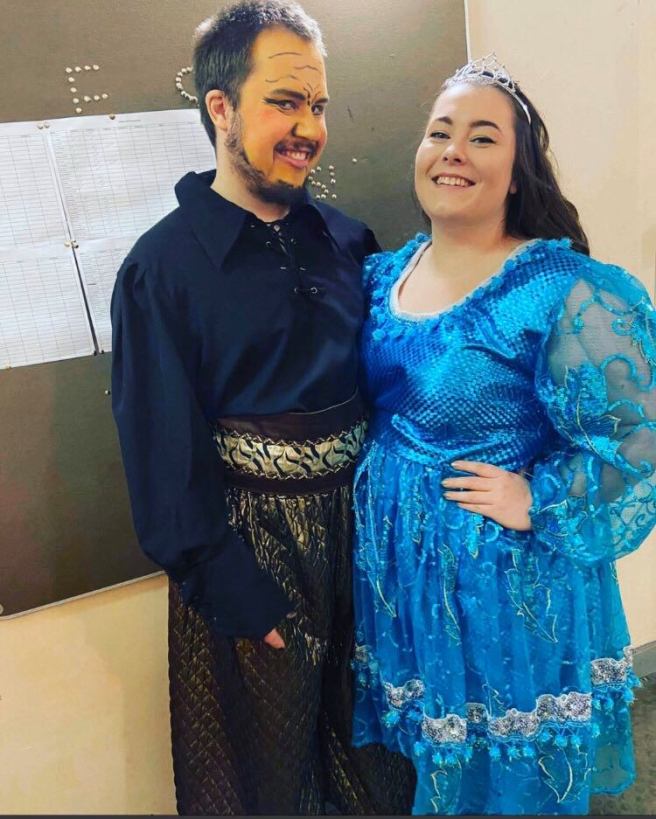 However, I’m thoroughly impressed that I managed to made him a cane from an old curtain pole on the morning of opening night (typical Alex leaving everything until the last minute) I even hand drew all the magic symbols and hand glued each individual gemstone! I guess those years of making DIY props and costumes for socials of Loco paid off after all. 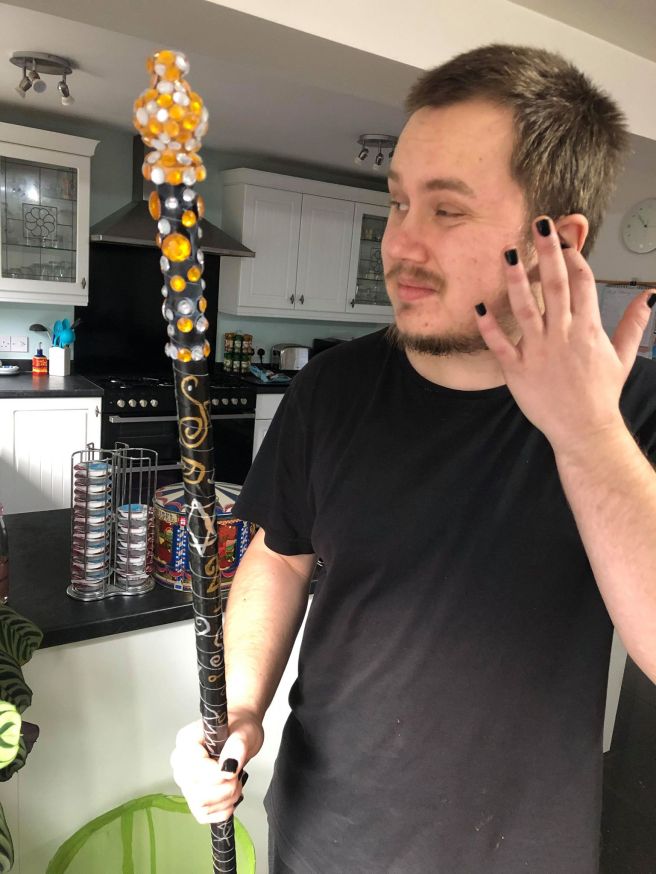 I know I mentioned the fab atmosphere earlier, but I have to reiterate how much of a family atmosphere is present during panto week. I loved having dressing room chats and getting to know new people. As I had the week off work, it was also so nice to just spend so much time with everyone. Alex and I even had some rare daytimes together too which was lovely. 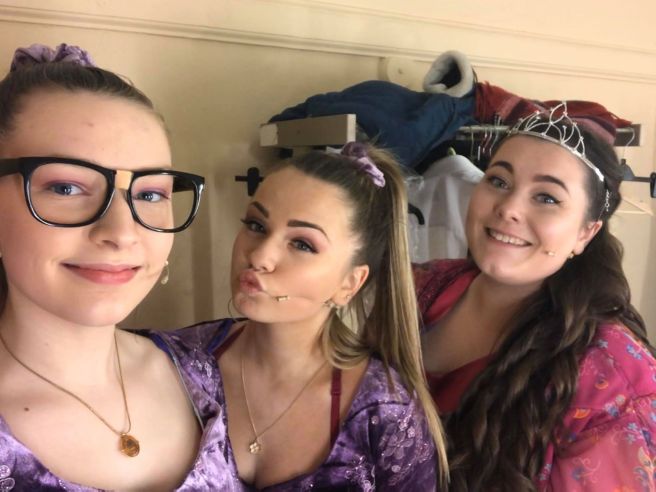 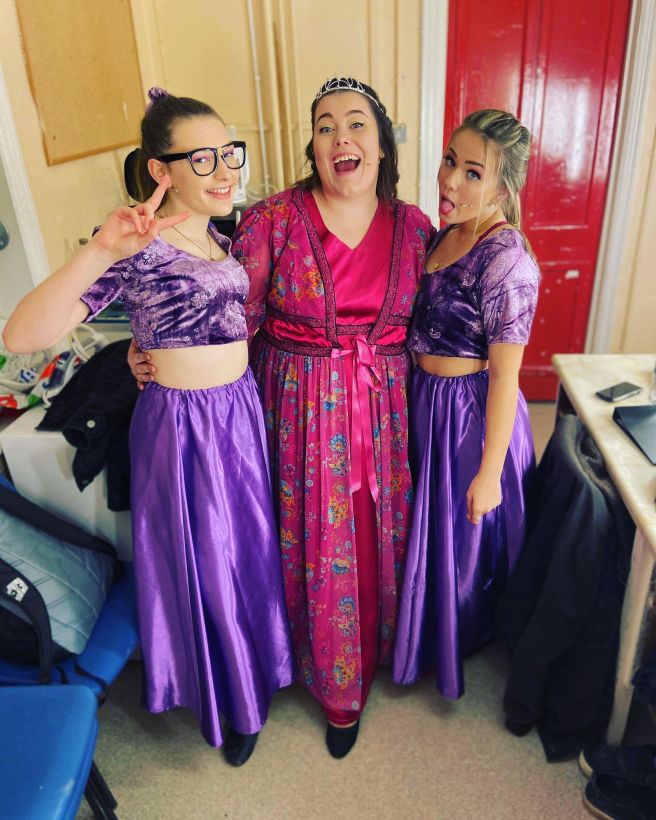 Another highlight of my week was getting so much support from friends and family. I had a list as long as my arm of shoutouts for various people that were coming to see the show. Some of my best friends in the world travelled all the way from Milton Keynes and Worcester (through the flooding too) to see the show! There was also the extra surprise of my little babe Zoe joining them. It was honestly so surreal seeing them sat in the audience, as the last time I performed on this stage I didn’t even know them and now they are some of the most important people in my life. They are honestly the most supportive friends you could ask for – they cheered (or booed) every time we came on stage and I genuinely cried tears on the drive home as I was so sad to watch them leave again. 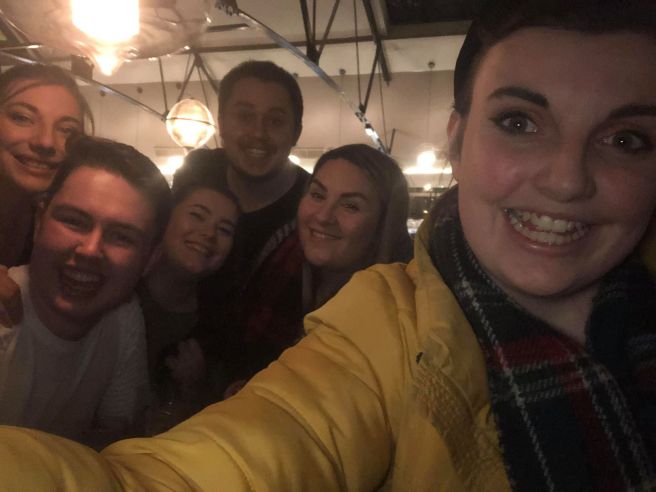 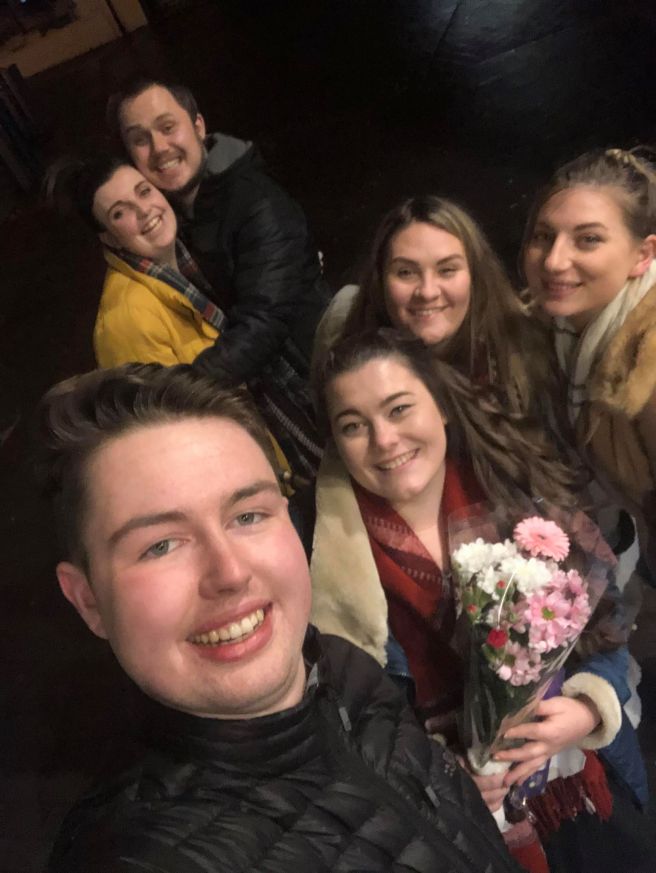 It also meant so much that my family got to see my on stage again. There were tears from lots of them and I honestly never thought some of them would be around to see me again so the whole week was a blessing really. It was also so humbling to get messages from so many of my mums friends who have little kids telling me that ‘Princess Jasmine’ had inspired them to audition for panto next year. The reviews were also such a confidence boost and highlight how fantastic every single person was.

A funny memory that needs to be documented though was Wednesday night when a group of ladies in the audience decided to sing along to all the numbers at the top of their lungs. It was so hard to keep a straight face on stage, but I’m glad they enjoyed themselves and if nothing else it’s a memory I’ll never forget!

Overall, it was just the best week and I can’t wait to do it all over again from September! Until then – watch this space for info about my next theatrical endeavour!